The College Football Playoff (CFP) announced today that Sting and Lenny Kravitz will be the headline performers for its new signature musical event, AT&T Playoff Playlist Live!, the premier concert series at the American Airlines Center in Dallas during the weekend of the national championship.

Additional acts will be announced later.

Join the conversation on Twitter about the event featuring @OfficialSting and @LennyKravitz using the official hashtag #CFBPlayoff.
Comments
0
You must be a logged-in member to add comments. Log In | Subscribe

Visit NBCNews.com for breaking news, world news, and news about the economy 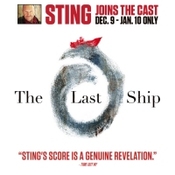 Sting will return to the Broadway stage as a performer when he steps into the role of Jackie White in the acclaimed new musical THE LAST SHIP, for which he made his Broadway debut as a composer earlier this season. Sting will assume the role beginning December 9 for four weeks through January 10, 2015 at the Neil Simon Theatre (250 W. 52 St). The announcement was made earlier this morning, live on NBC's ''Today'' in an exclusive interview with Matt Lauer. Sting says, ''We have spent five years working on THE LAST SHIP and I have relished every moment of that process. Taking to the stage is a continuation of that and I now accept the baton from my good friend and fellow Geordie, Jimmy Nail, who provided so much inspiration for the character of Jackie White. It is my distinct honor to join this remarkable cast and play the part of Jackie until I pass the baton back to Jimmy.''