Sting's Broadway-bound musical The Last Ship explores the songwriter's past while playing an out-of-town tryout in Chicago.

It's risky business for a rock music legend to make the leap to Broadway as a musical's lyricist and songwriter. Taboo, by Culture Club's Boy George, and Paul Simon's The Capeman, were no smash hits. After months of postponed openings, U2's Bono and The Edge found uneven success with Spider-Man Turn Off the Dark. Although he struck out with Lestat, Elton John found success with The Lion King and Billy Elliot. And Cyndi Lauper hit the jackpot when she won a Tony for Kinky Boots. Now, Sting is taking a stab at the Great White Way with his very personal musical, The Last Ship.

Sting - who has sold almost 100 million records worldwide and won 16 Grammy Awards - is a novice when it comes to creating a musical, but he does have a long-held love of the form. He grew up with the standards (thanks to a musical theatre-loving mother) and he played Macheath in a 1988 Broadway production of The Threepenny Opera. "I was educated musically by my mother's record collection, as well as Elvis Presley and rock ‘n' roll," he explained. "She brought in Rodgers and Hammerstein, West Side Story and My Fair Lady. I really ate those records up as a child. So I've always had a hankering for it."

But decades later, what finally brought Sting full circle and back to musicals, was an eight-year run of "not really wanting to write." After the release of his 2003 album, "Sacred Love," he realized he'd lost the burning desire to put words to music in that confessional, somewhat self-possessed way that is endemic with modern songwriters. Instead he stayed busy with a Police reunion tour and albums inspired by Elizabethan composer John Dowland (2006's "Songs from the Labyrinth") and hymns and carols (2009's "Winter's Night"). The songwriting drought ended four years ago with the idea to create some kind of theatrical piece built around his hometown of Wallsend, England, Once a vital shipbuilding center (the shipyard closed in the ‘80s). "Suddenly this thing just flowed, as if the songs were trapped inside me," he recalled. "It was bizarre. I had never written such a large group of songs so quickly. It was just deciding to honor the community I came from that unblocked me."

Set in a close-knit community where life revolves around the local shipyard, The Last Ship launches a pre-Broadway run at the Bank of America Theatre in Chicago this month. In the show, Gideon Fletcher returns after 14 years away to find the shipyard's future in danger and his childhood sweetheart engaged to someone else. It's a story about the importance of community and what it means to come back and find that you are bound together by passion, faith and tradition.

While Sting may be new to the musical theatre game, the team behind the production has a wide range of experience on Broadway: director Joe Mantello (Wicked), book writers John Logan (Red) and Brian Yorkey (Next to Normal) and choreographer Steven Hoggett (Once). From the start, Mantello thought the piece was extraordinary and that Sting had "found a way to write in the theatrical idiom without losing his own voice" And he noted, "It's a completely original musical and not based on a movie or other material. Sting took something from his own life and created a unique story and that makes it exciting."

Born Gordon Sumner, Sting grew up in in the shadow of the shipyards where it was expected he would eventually find work. One of his earliest memories is of a massive ship slowly rising at the end of the street. "I wondered as a young boy if that would be my destiny," Sting shared. "It was dangerous, it was toxic. And I didn't want it. " His dream was to be a songwriter, and he did everything he could to escape. So it's ironic that he would return to the life he rejected, the community that he had exiled himself from in order to find his muse again.

Sting admitted that in crafting his musical, he was learning on the job and had no idea how difficult it would be to shift his mind from four-minute pop songs to the story-telling, character developing demands of a musical. Luckily the team he was working with was not afraid to tell him to go back to the drawing board when something wasn't working. "That was novel and strange for me," he said laughing. "But I did feel like I was in safe hands."

Portraying the shipyard foreman is Jimmy Nail, an actor and singer beloved in England who grew up in the same town as Sting and actually worked for a few years as an engineering apprentice in the shipyards. Looking for an "authentic voice," Sting modeled the character on Nail and coaxed him out of retirement. And the more he got involved with the project, the more intrigued Nail became. "My father was a foreman in the yards, so these characters and this setting aren't fictional for me," he stated. "It's as real as it can be."

Last September Sting performed the musical's songs in a 10-night run of benefit concerts for New York's Public Theater, taped for later airing on PBS's "Great Performances." He also released the songs as an album. His goal was to "build familiarity with a potential audience." Definitely recognizable as tunes by Sting, the songs have a folky feel and are grounded in the traditions of his hometown and include jigs and waltzes. "These are wonderful, enjoyable songs to sing," Nail said. "They say a lot about the people of northeast England and how we find dark humor in the greatest adversity in the toughest of times."

The instinct to perform is bred deep in Sting's bones, and he readily admitted that some part of him will want to be up on stage performing in the show on opening night. "I think I'll be very antsy sitting in the audience," he said with a laugh. "I'm used to putting all my energy out there as a performer. This is another lesson I'm going to have to learn." 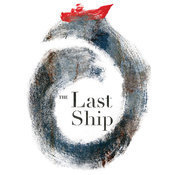 It's going to be a rockin' fall on Broadway if last night in Chicago was any indication. The previews here have begun of "The Last Ship," the gorgeously tuneful musical written by rock star Sting with a book by John Logan and Brian Yorkey, choreographed by Steven Hoggett and directed by Joe Mantello. "The Last Ship" is already quite sea worthy and built for a long journey. Enough with those metaphors. Truly, once "The Last Ship" is tweaked and polished in this out of town run, the show will be a formidable masterwork when it comes to Broadway this fall for an October opening. For one thing, the songs are delicious - actual songs with brilliant melodies, hooks and lyrics that poetically (and humorously) move along the story of a dying breed of shipbuilders in Newcastle, England...