It's going to be a rockin' fall on Broadway if last night in Chicago was any indication. The previews here have begun of "The Last Ship," the gorgeously tuneful musical written by rock star Sting with a book by John Logan and Brian Yorkey, choreographed by Steven Hoggett and directed by Joe Mantello. "The Last Ship" is already quite sea worthy and built for a long journey.

Enough with those metaphors. Truly, once "The Last Ship" is tweaked and polished in this out of town run, the show will be a formidable masterwork when it comes to Broadway this fall for an October opening. For one thing, the songs are delicious - actual songs with brilliant melodies, hooks and lyrics that poetically (and humorously) move along the story of a dying breed of shipbuilders in Newcastle, England.

The story is Sting's, although it's only partially autobiographical. The main character, Gideon, played by star in the making Michael Esper, is a rebel who went looking for an adventure on the high seas after impregnating his teenage lover, Meg. Of course, this is not what happened to Sting, a young English teacher and jazz musician who left Newcastle for London, and became a rock star and great family man. But he obviously saw these characters around him, and now they've come to life.

(Newcastle is going to become the next tourist destination in England thanks to Sting, as Highclere Castle is for "Downton Abbey.")

The audience last night, for the second preview, was rapturous for the songs, the set, and the actors, particularly Esper, veteran actor Fred Applegate (who pretty much steals the show as the saucy local priest), beloved British star Jimmy Nail (who finally gets his big moment in America, wow), Aaron Lazar, Sally Ann Triplett and the lovely Rachel Tucker. Joe Mantello has the whole principal cast, the ensemble, and crew in amazing shape and all the trains, as they say, running on time.

And yes, there are those songs. Sting recorded them himself for a hit album last year, there was a PBS special and a DVD. A few have changed since then, a couple of have been dropped, and those are good signs. It means nothing was written in stone. One beautiful ballad, "Practical Arrangement," is now omitted as Tony winner and multiple Oscar nominee Logan continues to delineate and streamline the book.

All the artistic participants are on hand 24/7, by the way, unlike what we've heard about other shows. Sting sits quietly by the soundboard every night, unobtrusive but taking notes, wringing hands, making changes.

He doesn't have to do much else. Unlike with this past season's original musicals, everyone leaves "The Last Ship" humming if not outright singing what they just heard. The standouts are the title song and the stomping, fun "What Have You Got." But there's also the beautiful "What Say You, Meg," sung poignantly by the show's talented second lead, Aaron Lazar, and now sounding like the hit you missed the first time you played an album.

I'm also convinced that "The Night the Pugilist Learned How to Dance" will become a Broadway classic. Sting also deftly weaves in three of his lesser known past compositions: "When We Dance," "Island of Souls," and "Ghost Story" that now sound as if they were waiting for a musical.

"The Last Ship" comes with a great provenance of producers - Sting's savvy manager Kathy Schenker has put together a group that includes Jimmy Nederlander, Herb Alpert and Jerry Moss (the A&M of A&M Records which launched Sting and the Police 35 years ago), vets like Roy Furman and Kevin McCollum ("Motown: the Musical"), and most importantly, Jeffrey Seller (he steered the successful revival of "West Side Story"). They've also got a secret weapon in Producer of Producers Manny Azenberg, who was here last night in a Yoda capacity.

These people are going to look brilliant this fall when "The Last Ship" docks (sorry) in the theater district!

PS Funny, isn't it? First Cyndi Lauper has a triumph with "Kinky Boots." Now comes Sting with "The Last Ship." A whole generation of real composers from the rock-New Wave scene are taking Broadway by storm. Very exciting!

PPS Chicago was a good place to launch this show. It's just like the Newcastle on stage – cold, cloudy, stormy, windy–in the middle of June! 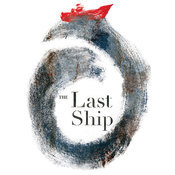 Jun 6, 2014
Sting musical launches in Chicago before cruising off to Broadway...

Growing up in the former shipbuilding town of Wallsend in Northern England, singer-songwriter Sting remembers being terrified by the enormous ships and the apocalyptic noise they would make at launches. "I was born within the shadow of the shipyard. Literally at the end of my street, most of the time was a mighty quarter-of-a-million ton tanker or battleship," said Sting in an October 2013 news conference in Chicago. "It was a huge, surreal, industrial landscape." But now a ship of a different sort has the potential to instill fear in Sting: his first foray as a musical theater composer and lyricist. The Broadway-bound musical "The Last Ship" - inspired by Sting's experiences in Wallsend - launches its world premiere in Chicago at the Bank of America Theatre. Previews start Tuesday, June 10, with an official opening slated for Wednesday, June 25...