What Inspired Sting to do a Musical?

Sting sets sail on the waters of musical theater with his Broadway-bound show, The Last Ship.

A great physique and amazing staying power aside, Sting continues to stretch his artistic muscles, taking a crack at musical theater with The Last Ship, which draws from the musician's memory of life in the seaside town of Wallsend, in northeast England. Directed by Wicked's Joe Mantello and featuring a book by Tony Award winners John Logan (Red) and Brian Yorkey (Next to Normal), the musical runs from June 10 to July 13 at Chicago's Bank of America Theatre before its Broadway debut in October. Recently, Sting sat down with Michigan Avenue to offer insight into the project.

When did you leave home - not physically, but in your head, in your heart?

STING: Very early on. I lived in the shadow of a shipyard. As a child I'd wondered if that was my destiny. It's not where I wanted to be. It's noisy, dangerous, highly toxic. I did everything in my power to escape. Got a guitar. Had a dream about being a musician. And I think I dreamt it hard enough that it actually happened.

Going home is a recurring theme in literature. Why did you take this trip now, and what did you find there?

S: It's ironic that the landscape I did everything in my power to escape from, and the community I abandoned and exiled myself from, should be the very place where I'd refined my creative juice - my muse, if you like. Following a long writer's block - not writing songs for about eight years - I decided to look back, to tell the story of the community I came from. Sidestepping my ego and giving voice to other people allowed the floodgates to open. The songs just came out of me, almost fully formed.

I suspect many people will be surprised that you have chosen to work in the relatively conventional mode of musical theater. Are you a fan?

S: My mother was a piano player, and she would bring Rodgers and Hammerstein albums into the house, which I played to death. So you scratch me and I start singing Carousel. I love it.

Songwriting is your craft, but a three-minute song is a different project from a full-out musical. Was this a challenging process for you? Or did you lean on Mr. Logan to fashion the connective tissue?

S: I've never written dialogue before, so I wouldn't trust myself with that. But having a collaborator of that caliber is fantastic. It was a very rangy piece before he honed it down. He has a laserlike intelligence. He'd say, "This has to be lopped off." It's about killing your babies, you know? So songs that I adored, characters I loved were excised. But Logan is experienced and confident enough to tell me that. 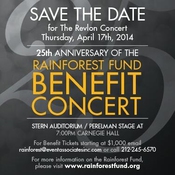 Apr 18, 2014
Rainforest Fund benefit concert celebrates 25th anniversary with Sting and Trudie Styler, performances by Paul Simon, James Taylor, Stephen Stills...
Power-couple Trudie Styler and Sting led a star-packed line-up at the three-hour event held Thursday at New York's Carnegie Hall. It's serious business trying to save the world's rainforests. But the annual Rainforest Fund benefit concert series meant to raise funds for the cause long ago learned the value of keeping things light. For the 25th year, power-couple Trudie Styler and Sting led a star-packed line-up at Carnegie Hall - the latest of which included Paul Simon, James Taylor, Dionne Warwick, Stephen Stills, Renee Fleming and more. At the three hour event, held Thursday, nary a twig of the rainforest was mentioned, outside a tidy speech at the mid-way point by Styler, outfitted in a chic white, floor-length gown...
Read more
+