Sting and Shaggy announce three new concerts in Italy: the two iconic artists will perform on August, 3 at Piazza del Popolo in Ascoli Piceno, the following day at Piazza della Cattedrale in Trani and on August, 5 at Arena della Regina in Cattolica.

Tickets for the shows will be available for purchase for Sting.com members starting Monday April 23rd at 10am. The general on-sale will start Tuesday, April 24 at 11am at www.ticketmaster.it, www.ticketone.it and in all official selling points.

The two iconic artists will also perform in Italy this summer on July, 26 at Forte Arena in S.ta Margherita di Pula (CA), on July, 28 at Auditorium Parco della Musica (Cavea) in Rome, on July, 29 at Arena di Verona, on July 30 at Etes Arena Flegrea in Naples and on August, 1 at Teatro Antico di Taormina.

Performing both separately and together, the iconic artists will play selections from their island-flavored, collaborative album, 44/876, as well as melding their bands to explore each other’s most celebrated hits such as "Every Breath You Take," "Englishman in New York," "Message in a Bottle,” “It Wasn’t Me,” "Mr. Boombastic" and "Angel.”

The pair initially joined creative forces to record their new song "Don't Make Me Wait" - a tribute to the Caribbean sounds that influenced them both - and ended up recording an entire album full of joy, melody and uplifting music. 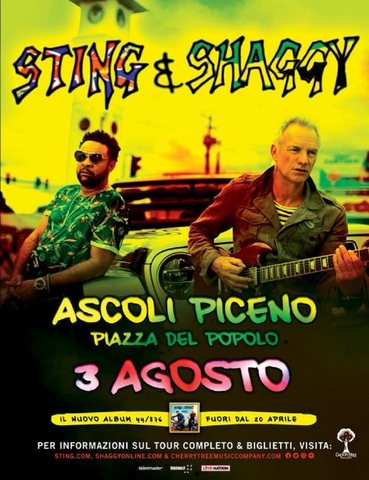 Apr 19, 2018
Terrific reviews continue for The Last Ship as it docks in Birmingham...

With The Last Ship currently docked at Birmingham's New Alexandra Theatre, it's pleasing to see that the Midland's press have been as positive as their counterparts in the North East and on Merseyside. If you're quick you can still catch The Last Ship at the New Alexandra as it runs until Saturday, 21 April before moving on to Northampton...

Record Store Day is the one day of the year when over 200 independent record shops all across the UK come together to celebrate their unique culture. Special vinyl releases are made exclusively for the day and many shops and cities host artist performances and events to mark the occasion. Thousands more shops celebrate the day around the globe in what’s become one of the biggest annual events on the music calendar. 2018 sees the reissue of the second Police single ‘Roxanne’, the first for A&M Records. Released in April 1978, it was the first single from debut album Outlandos d'Amour...