"The Last Ship: Live At The Public Theater" - DVD To Be Released September 23!

Cherrytree/Interscope A&M Records is pleased to announce the worldwide release of ''The Last Ship - Live At The Public Theater'' DVD on September 23. Featuring songs from Sting's latest album and forthcoming Broadway musical of the same name, the DVD captures Sting in an intimate evening of music and storytelling filmed on his birthday, during a run of 10 benefit concerts performed at The Public Theater in New York City. The DVD will be available for Amazon.com pre-order beginning today at www.amazon.com/dp/B00MOG5EXQ, and both the DVD and streaming video will be available from Amazon.com on September 23.

For ''The Last Ship - Live At The Public Theater'' DVD performance, Sting is joined by a 14-piece band, many of whom also hail from the North East of England, including actor and singer Jimmy Nail, who appears in the upcoming stage production, as well as Kathryn Tickell on violin and Northumbrian pipes, Peter Tickell on violin and mandolin, Julian Sutton on the melodeon, and vocalists The Wilson Family. Also featured is Musical Director, Rob Mathes on acoustic guitar, piano and keyboards, and background vocals. Against a backdrop of evocative visual projections, this captivating live performance takes viewers on a journey of love, loss, redemption, and self-discovery, offering an inside look at the story behind The Last Ship.

Watch a preview for ''The Last Ship - Live At The Public Theater'' at www.youtube.com/watch.

The track-listing for the DVD is as follows:

The Last Ship
Shipyard
Coming Home's Not Easy
And Yet
August Winds
What Have We Got?
Practical Arrangement
What Say You Meg?
Dead Man's Boots
Big Steamers
Sky Hooks And Tartan Paint
Jock The Singing Welder
So To Speak
Show Some Respect
Underground River
The Last Ship (Reprise)

Sep 1, 2014
Uprising of Love - Benefit Concert to Feature Sting and Patti LuPone - September 15 in NYC!
On Monday, September 15, Executive Producers Stephen Schwartz (Wicked, Godspell, Pippin) and Bruce Cohen (American Beauty, Milk, Silver Linings Playbook) will present Uprising of Love: A Benefit Concert for Global Equality at Broadway’s Gershwin Theatre. Featuring performances by 16-time Grammy Award-winner Sting and two-time Tony Award and two-time Grammy Award-winner Patti LuPone, this event strives to remind global leaders that "the world is watching" and to raise significant funding for grassroots organizations and activists around the world. The net proceeds of this event will go directly to Fueling the Frontlines, a three-year, $20 million campaign for global LGBTI rights led by the Astraea Lesbian Foundation for Justice. Astraea is the only philanthropic organization in the United States solely dedicated to advancing LGBTI rights globally...
Read more
+ 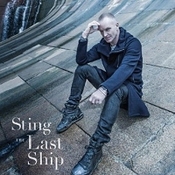 To benefit the Sage Gateshead 10th Birthday Appeal, Sting will perform songs from "The Last Ship," his latest album and new Broadway musical of the same name, on 24th and 25th April 2015. These will be the only UK performances of their kind and are both kindly supported by Cunard. Additional support comes from Shepherd Offshore and Port of Tyne. Tickets will go on sale to the general public beginning Monday 1st September from 10am at www.sagegateshead.com, and also at Sage Gateshead's box office on 0191 443 4661. Sting.com fan club members will have an opportunity to purchase tickets in advance of the general public beginning tomorrow, 28th August at 10am (local time)...