Sting treats Nashvillle to Police favorites, solo hits and his own country classics... 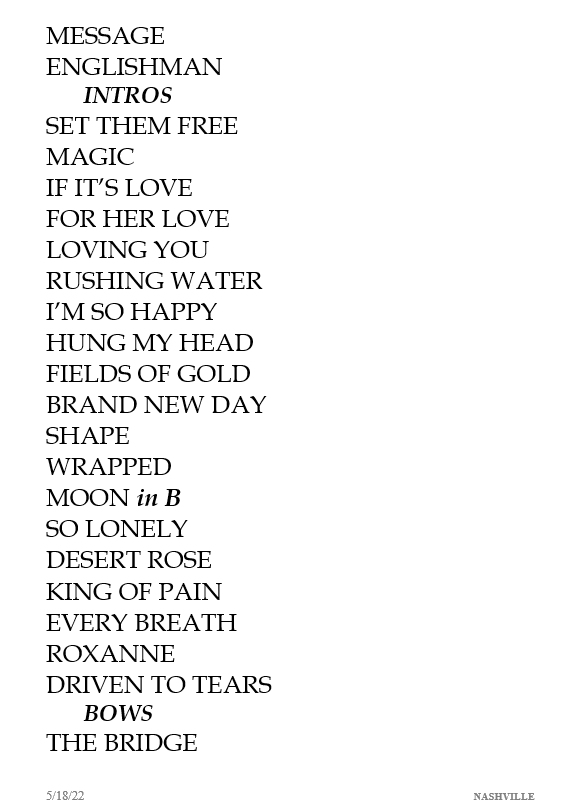 A “Message In A Bottle” arrived on the banks of the Cumberland River Wednesday night.

That was the Police classic Sting picked to open an eclectic evening at Nashville’s Ascend Amphitheater - as part of the Rock and Roll Hall of Famer’s “My Songs” tour.

Donning leather pants, a T-shirt with the shortest sleeves modern science will allow, and a headset microphone (move over, Garth), Sting and his six-piece, multigenerational band weaved their way through a 22-song set.

The night included a generous handful of Police tunes, solo cuts that demonstrated his worldly influences, and a few tracks that reminded Nashville of the country music cred he’s picked up along the way.

Hasn't lost a step: At 70, Sting is in incredible form. On one hand, does that even need to be said at this point? The guy's been famed for staying in great shape for about as long as he's been famous.

On the other hand, it bears repeating at a time when a number of veteran rock vocalists - some older, some younger - are audibly losing their fastball. Sting lowered the pitch on a few of his oldest tunes, and you could hear the effort being made to reach the highest notes of “Roxanne," but by and large, he's hardly lost a step over the last 45 years.

This is still the “My Songs” tour, named for an album of reinterpreted favorites Sting released ahead of the pandemic. But as he waited years to get the show back on the road, he made a new original album, “The Bridge,” and pulled out several songs from it at Wednesday’s show - with fair warning.

“You had a few hits, right?” He said, taking a seat on a stool before his crowd could beat him to it. “Songs you can sing along to, get nostalgic? I'm gonna play some new songs, I'm sorry. But If you look at the small print of the ticket you’ve got in your hand, it will say, ‘He will play some new songs.’ You never know, they might be hits one day, right?”

It’s hard to classify a hit in the digital age, Sting noted, but here’s how he knew he had one in the old days: in his hotel room, he “was woken up by a man cleaning the windows outside, and he was whistling something that I recognized. He was whistling 'Roxanne.'"

After the third song in a row from "The Bridge," he asked the crowd with a smile, "That wasn't so bad, was it?"

Between songs, Sting recalled how a love of TV westerns like "Bonanza" and "Maverick" led to discovering country and western music, and delving into the Hank Williams and Buck Owens songbooks.

"Then, when I became a songwriter, I would often try my hand at the genre. But with me, there's a problem of authenticity, because I'm not from Nashville. I'm from the north of England. However, occasionally a bonafide country singer would cover one of my songs."

That started with Toby Keith's hit 1997 version of "I'm So Happy I Can't Stop Crying" - which Sting performed exclusively for Nashville on Wednesday. He followed it with "I Hung My Head," which Johnny Cash covered in 2002 on his final album released during his lifetime.

Another illustration of Sting's genre-spanning touch as a songwriter came with "Shape of My Heart," which was sampled by late rapper Juice WRLD on "Lucid Dreams." Sting and background vocalist Gene Noble blended the two songs at Wednesday's show.

After stacking "Roxanne," "Every Breath You Take," So Lonely" and "Desert Rose" into the final stretch, Sting took a bow with his band. But as they left, he took a seat.

In this case, it was the title track to "The Bridge," which certainly resonated on Nashville's riverbank.

"And now the city's all but drowned/ And here upon the ridge/ Some will seek the higher ground/ Some of us the bridge."

May 18, 2022
Enter for a chance to win a pair of tickets to Shaggy's "Com Fly Wid Mi" Album Release Party in New York, Hosted by Sting...

On Thursday, May 26 2022, Sting will host an album release party for Shaggy's new album, "Com Fly Wid Mi" at The Blue Note Jazz Club in New York, NY. The new album, produced by Sting, features the Sinatra Songbook in a reggae style. Enter below for your chance to win a pair of tickets to this special, one night only, invitation-only event, which will include performances by Shaggy and Sting...

We are delighted to confirm a further date has been announced on the European My Songs tour this autumn, at the Oslo Spektrum in Norway on 19 October 2022. Tickets will go on public sale on Monday, 23 May at 10am. The presale for Sting.com members will commence on Thursday, 19 May at 10am and run until Friday, 20 May at 5pm. (All times are local)...