Sting: The Last Ship Premieres in the US on Great Performances Friday, February 21 at 9PM/ET on PBS!

Sting: The Last Ship will air on Thirteen's "Great Performances," Friday, February 21 at 9PM/ET on PBS in the US (check local listings) and features the 16-time Grammy Award-winning musician performing songs from his new album, The Last Ship, and forthcoming play of the same name in an intimate evening of music and storytelling live at The Public Theater in New York City.

The program offers unique insight into the creative process behind Sting’s latest album and his new musical, premiering June 2014 in Chicago before its debut on Broadway in the fall. Drawing upon his childhood memories growing up in the shipbuilding community of Wallsend in the North East of England, Sting provides a glimpse into the narrative of the play through the songs on the new album, inspired by the story of "The Last Ship."

He is joined by a 14-piece band, many of whom also hail from the region (Kathryn Tickell on violin and Northumbrian pipes, Peter Tickell on violin and mandolin, Julian Sutton on the melodeon, and vocalists The Wilson Family), including actor and singer Jimmy Nail, who will appear in the upcoming stage production. Also featured is Musical Director Rob Mathes on acoustic guitar, piano and keyboards, and background vocals.

The evening was filmed on Sting’s birthday (October 2) at a special fan club performance during a 10-night run of benefit concerts that immediately became one of New York’s hottest tickets. The Public Theater’s Artistic Director Oskar Eustis observed at the time, "The Last Ship’ is shaping up to be a masterpiece, both an elegy for and a celebration of the working class life of the Newcastle shipyards."

Sting has crafted a richly diverse musical landscape for a close-knit community of original characters. With a backdrop of evocative visual projections, he shares his experience emerging from a songwriting hiatus to pen his first album of original material in nearly a decade and his very first musical theater score, incorporating a mix of genres and styles ranging from pub-like folk tunes to ballads to a wall of sound from the full band.

"The memories at the heart of The Last Ship have occupied my mind for most of my life," said Sting. "I was compelled to tell this story." Sting’s collaborators on the Broadway-bound production include the Tony-winning team of book writers John Logan ("Red," "I’ll Eat You Last") and Brian Yorkey ("Next to Normal") along with director Joe Mantello ("Wicked").

The musical program is as follows:

The Last Ship
Shipyard
Coming Home’s Not Easy
And Yet
August Winds
What Have We Got?
Practical Arrangement
What Say You Meg?
Dead Man’s Boots
Big Steamers
Sky Hooks and Tartan Paint
Jock the Singing Welder
So To Speak
Show Some Respect
Underground River
The Last Ship (Reprise)

"The Last Ship" will open on Broadway in the fall of 2014, following a pre-Broadway World Premiere from Tuesday, June 10 – Sunday, July 13, 2014 at Chicago’s Bank of America Theatre.

Check out an exclusive clip (US only) from the program at http://www.pbs.org/.

Comments
2
You must be a logged-in member to add comments. Log In | Subscribe
December 18, 2013 posted by ahlehner
We are wrapping gifts to "Last Ship"
Merry Christmas. Tell Dom his November is featured on the soundtrack of my season. February 21st - I'll have to take the day off and have a viewing party with mom. We may not have gotten the right seats for her to climb the steps March 15th. But fate may have her there. She is already wondering what will be on the playlist. She is 87 and I Thank you from the bottom of my weary soul. We're wrapping gifts with the fuel that is your Ship..
December 09, 2013 posted by lorib
Great Performances
February sounds so far away, but I'm really looking for to this. I've really been enjoying the album and Sting and friends performing is such a treat. I hope we'll be able to purchase a copy of this presentation.
Newer comments    1 - 2 of 2    Older comments 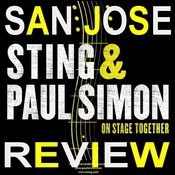 Feb 17, 2014
Legends Simon and Sting slay San Jose in concert at SAP Center...
As the lights dropped in the SAP Center, a sudden and powerful applause erupted in the near-maximum capacity building in anticipation of witnessing two rock music legends: Paul Simon and Sting. "Paul and I share a lot of musical curiosity about a spectrum of music that's pretty wide, and as vehicles for songwriting. So we have lot in common," Sting said in an interview earlier this month with Billboard magazine in regard to touring with his New York neighbor, Paul Simon...
Read more
+ 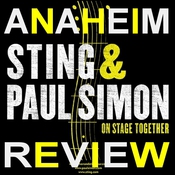 Feb 17, 2014
Sting and Paul Simon - The Honda Center...
Last month, Paul Simon and Sting spoke with Rolling Stone about their "On Stage, Together," tour. "We come from very different places, culturally," Simon explained. "Our voices are different, our accents are different, our sense of rhythms are different." And he's absolutely right. Where the beloved half of Simon & Garfunkel pulls influences from folk music and worldbeat, Sting's roots are in rock, pop, soul and reggae. To be honest, I wasn't quite sure how these two seemingly different icons could possibly pull off a collaborative tour, and to my delighted surprise, they proved to me that it can be done, and done well...
Read more
+