The superstar DJ's upcoming LP, to be teased on Snapchat, will include appearances from Wiz Khalifa and Sting, among others

Superstar DJ Afrojack has contributed to giant pop hits by the likes of Pitbull ("Give Me Everything") and Beyoncé ("Run the World [Girls]"). He's a headliner at megaclubs and festivals around the world and a fixture on Top DJ lists. What he hasn't done, though, is release an album - until now.

On May 19th, the Dutch native, whose real name is Nick van de Wall, will release Forget the World, featuring collaborations with Wiz Khalifa ("Too Wild") and Sting ("Catch Tomorrow"), among others. Before that, on March 14th, the album's artwork will be shared on Snapchat with those who follow realAfrojack via the service's Snapchat Stories. In another first, followers will also get exclusive ten-second clips of music from the album – a new clip each day leading up to Afrojack's performance at the Ultra Music Festival in Miami.

We spoke with Afrojack about the album, his collaborators and the inspirational importance of rubber duckies.

You're the first person to reveal album information on Snapchat. What's the thinking behind that decision?

It's a way to basically send [information] to everyone around the world, for a certain period of time, so it's not going to be straight leaked online. It's something that goes directly to fans; directly from me to them.

Do you use Snapchat?

Yeah, I reply to fans every now and then, and I receive a lot. Basically, I think this is what artists used to have when they got fan mail; now I get it over Snapchat. I have so many people tell me, "I love your music," or "I love this song." They send me videos, like some guy and his friends going crazy over a song. It's cool to see every now and then.

The album title has a lot of meaning for you. Can you talk to me about that?

Is letting things get you down something you've had a problem with in the past?

Yeah, this has been one of the things I've been thinking about in the last couple of weeks. When you go on Facebook and you go on Twitter and basically the whole world, the whole generation is on Facebook and Twitter. They live a digital life. But the digital life takes so much of their time that [it] basically becomes their real life. It must be so hard to constantly be pressured by people around you, and the world around you, for even liking something, you know?

What's an example of that?

And the message of the album is to be yourself?

The message that I'm sending out is basically a reminder to everyone in the world that it shouldn't be that way. I remember when I started getting into music, everyone looked at me like I was a fucking idiot. Like, "You're going into music?" I was in school, I was a good learner; if I wanted to get something done, I could get it done. I was lazy, though. I was always like sort of an outcast. And when I got home, I was always doing music, but when I was doing music, no one was there to judge it, you know? It was just me in my bedroom. It gave me freedom and made me happy. I think that freedom is really important for people to remember and you can create it yourself. You're going to be way happier doing what you actually love and finding other people that love the same thing then doing something that other people love so you're just cooler and you have cool friends.

Are there any tracks on Forget the World that feel like a real step forward to you? Or ones where you achieved something you weren't sure you could pull off?

It's not necessarily something I thought I couldn't do, but it's really important to start off with the right perspective of me as a person or musician: With this album, I wanted it to be real and completely honest and musical. I didn't want to make it a festival banger. I made club tracks, dance hits, and dance floor smashers and stuff like that - it's like doing the same tricks a couple of times over again, in different ways, but its still always a dance floor trick. Basically on this album I wanted to do me. "Where's the big build up?" and yada yada - of course I'm going to remix it and perform at festivals, and I'm also a party guy so you have some party tracks here and here. But the basic essence of this album is showing the musical side of me. It's music in its more honest form - no tricks, just lay the songs out there.

What did Wiz Khalifa and Sting bring to the album that was most surprising to you?

The first time I went to sit down with Wiz, I just felt the vibe. I had 30 tracks I wanted to play him, but there were 20 club tracks and five hip-hop tracks and they were really . . . not awkward but unconventional. Not the kind of song you meet Wiz Khalifa and say, "Oh, I want to play this song." We were just vibing and I played him that instrumental song I did and it worked out to be really special, completely different than anything that's in the market right now. The same thing with Sting - being able to create something that hasn't been done before.

Is it fair to say that making this album was a liberating experience?

Yeah, that's also the cool thing about the Snapchat thing: it's a temporary glimpse, it's nothing that stays with you, it's something you can control. That message of freedom is really fucking important to me. It's been hard to cope with the past couple of years, and I'm pretty sure the whole world on the Internet has the same problem. But I've found my way, and people can enjoy my music for themselves. They don't have to worry about what people think about it.

(c) Rolling Stone by David Marchese
Comments
0
You must be a logged-in member to add comments. Log In | Subscribe 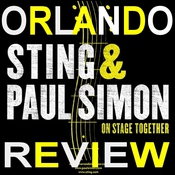 Mar 16, 2014
Paul Simon and Sting at Amway Center...
It doesn't seem like a union that would work. Paul Simon, the introspective singer-songwriter known for pop classics from "The Sound of Silence" to "Graceland," trading harmonies with Sting, MTV-friendly frontman of the Police known for rafter-rattling vocals and jazz-tinged world music. On Sunday at Amway Center, the duo even looked like an odd couple: The diminutive, balding Simon next to the lanky rock star with the angular features. Musically, however, the concept was inspired. For a spirited, skillfully executed 2-1/2 hours, the two men showed the potential of artful sharing, unveiling nuances in familiar hits, nudging material into new directions and mingling resources of two bands loaded with top-notch musicians...
Read more
+ 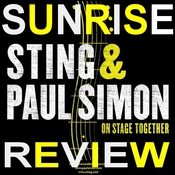 Mar 16, 2014
Sting, Paul Simon at BB&T Center in Sunrise...
Even the T-shirts at the memorabilia counter reflect the respect Sting and Paul Simon have for each other. One shirt reads "Paul Simon and Sting, On Stage Together." A second flips the billing, with "Sting and Paul Simon, On Stage Together." This is a clear musical bro-mance, sparked by a concert in New York last May with the two Central Park West. Then followed their grand idea - "let's tour together!" - and that tour stopped at the BB&T Center Sunrise Saturday night. OK, we get it. Sting will be his bodyguard, Simon will be his long-lost pal. The pairing also a.) pools their audiences and b.) puts them in a large arena, under the name of traveling down the same musical path. Hey, business is business. They're not here to be cartoons in a cartoon graveyard...
Read more
+