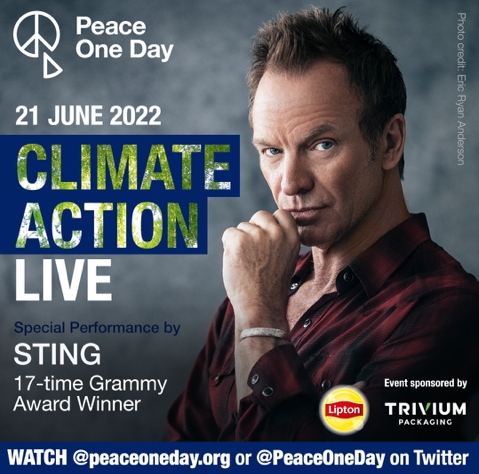 Acclaimed musicians, actors, business leaders, climate activists and environmentalists from around the world will unite on 21st June for Climate Action Live, an international event convened by Peace One Day. Climate Action Live will facilitate conversations on a more sustainable future for our planet. Live panel discussions and special interviews will focus on the interconnections between climate and peace, under the theme: “No Climate Action – No Peace.”

These urgent conversations will draw together views from climate-justice activists, leaders, and artists from around the world. Through these dialogues, Climate Action Live 21 June aims to make a compelling case for a coordinated and global effort, setting out action points to help individuals and organisations support change at all levels.

Julia Jackson, Founder of Grounded said: "We are inundated with messages that it is “game over” for our civilization and it’s hard not to get stuck in the doom-and-gloom. However, there are hundreds of viable solutions that can mitigate the worst impacts of our climate emergency.  Climate Action Live is a day to manifest climate action around the world, focused on real action that the global community can take. The time is now; join us June 21st to act to protect the Earth.”

Emmanuel Jal, Musician, Actor, Activist said: “I’ve been working with Peace One Day for many years now collaborating to raise awareness of Peace Day 21 September. I’m proud to be performing and participating this year in Climate Action Live 21 June. Don’t miss it, please tune in.”

Michael Mapes, CEO Trivium Packaging said: “Peace One Day has the ability to bring powerful voices from business, governments, and activist groups to the table. That’s exactly what we need to move the needle on climate action. The climate crisis is not for others to solve. It’s down to our common action, and Trivium Packaging is joining forces with Peace One Day on June 21 to be part of the solution.”

Rik Daems, President of the Network of Contact Parliamentarians for a Healthy Environment, Parliamentary Assembly, Council of Europe said: “A safe, clean, healthy and sustainable environment IS a basic human right.”

Climate Action Live 2022 is sponsored by Lipton and Trivium Packaging.

The Awareness Partner of Climate Action Live 21 June 2022 is Twitter.

ABOUT PEACE ONE DAY

Filmmaker Jeremy Gilley founded Peace One Day in 1999 to establish an annual Peace Day with a fixed calendar date and document the process. In 2001 Peace One Day’s efforts were rewarded when the member states of the United Nations unanimously adopted the first ever annual day of global ceasefire and non-violence on the UN International Day of Peace, fixed in the calendar as 21 September – Peace Day. Peace One Day’s overarching objective is to ensure that people are aware of the day and engage all sectors of society in the day’s peaceful observance and celebration.

Peace One Day now marks four critical days in the global calendar, each with deep significance in relation to seasonal change:

- 21 December - Space Transformers Live, a dynamic digital experience giving a voice to the young change-makers, thinkers and innovators who are transforming the space around them for the benefit of their community and our world.

These live digital events provide platforms for discussion and action around issues of global concern. Peace One Day works closely with Digitalis, Social 360 and Signal AI to gather extensive data on the reach of our online presence. The period of measurement is a week on either side of each show, for a total of eight weeks each year.

- 15,338 articles were published about Peace One Day in traditional media, all of which carried either positive or neutral sentiment.

- 75,207 unique users visited peaceoneday.org to read more about the organisation’s work or watch one of the four shows.

- Those posts generated 1,052,838 engagements in the form of watches, likes, comments, shares or clicks-through.

- The 34  hashtags which formed the core of Peace One Day’s campaigns were used a total of 1,551,365 times across over 190 countries (full country list available on request). The number of people that would have seen these posts is unknowable, but any fair estimate easily runs into the hundreds-of-millions.

- Of global charities and organisations focused on international development and peace, Peace One Day ranked 21st in relation to social media presence.

Through awareness initiatives and strategic partnerships, and thanks to all Peace One Day’s trusted partners, sponsors, and broadcast contributors the number of people aware of Peace Day is moving ever closer to 2 billion.

PEACE ONE DAY MISSION AND OBJECTIVES

To become a content generator and a destination for global discussions around the issues of justice, equality, diversity, inclusion, climate action, peace, sustainability and the mobilisation of youth, leaving audiences INFORMED, INSPIRED and ENGAGED.

- Decrease violence on Peace Day, including in the cyber world

We are delighted to confirm a further date has been announced on the European My Songs tour this autumn, at AFAS Live in Amsterdam on 17 November 2022. Tickets will go on public sale on Friday, 10 June at 11am. The presale for Sting.com members will commence on Wednesday, 8 June at 10am and run until Thursday, 9 June at 5pm. (All times are local).