It was a night of miracle and wonder as two of the world’s top artists shared a stage under the stars in a concert that often soared to magical levels.

A sell-out audience paid up to $500 a ticket to see Paul Simon and Sting perform their - and each other’s - enduring songs at Sir James Mitchell Park.

Early in the set the mutual respect between the pair was obvious as they launched into two of their timeless classics, sharing lyrics and bouncing off each other during Simon’s Boy In The Bubble and Sting’s moving Fields of Gold.

But it was their interpretations of each other’s songs that made the night so memorable, first with Simon’s take on Fragile, followed by Sting (aka an Englishman in South Perth) returning the favour on America.

Hearing two of the most iconic voices of the past half century reimagining each other’s work made for a inspired partnership.

The concept for the Together On Stage tour dates back to 2013 when the long-time friends and New York neighbours first performed as a duo for a benefit concert.

Strolling on to the stage, the mega-star double act at first make for something of an odd couple, with Sting, a 63-year-old Englishman with the physique of an athlete, towering above Simon, a 73-year-old trilby-wearing American.

While their successes peaked in different decades and in different genres, the pair of course find symmetry with their experimentation with world music, from The Police’s reggae-rock to Simon’s Zulu harmonies.

For almost three hours, the duo delved into their vast back catalogue, delivering crowd-pleasing mini-solo sets and merging bands to duet on each other’s hits and perform versions of one another’s songs.

Tickets are still available for tonight’s second and final Paul Simon and Sting’s Together On Stage performance at Sir James Mitchell Park. 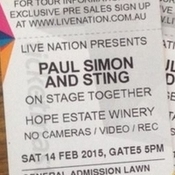 Evoking memories of the clip for Paul Simon's You Can Call Me Al, where Chevy Chase towered over the singer and mimed the lyrics to his song, Sting is a full head taller than Simon as they stroll on to the Hope Estate stage. But that's where the comparison ends. No one can steal Simon's thunder, not even when he scripts it. The man, small of stature and of few words, pens and delivers lyrics with a quiet earnestness that commands attention. In Simon and Garfunkel, the haunting beauty of the harmonies and the considered accompanying musicianship transformed simple, heartfelt folk songs into a soundtrack for many a fan's life. This was the case for Sting, who told the crowd: "I'm sure I'm not the only one to have Paul Simon as a soundtrack to their life." 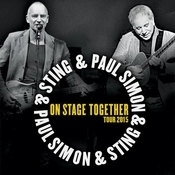 You can punch out all sorts of superlatives to describe the Paul Simon and Sting live concert experience. But one word stands out: wow. The duo, set to play their last Australian shows on the South Perth foreshore on Saturday and Sunday night, played to about 13,000 fans at Sydney’s Qantas Arena on Friday night. And unless Friday night was an anomaly (which I’m almost positive it wasn’t) everyone who is going to the Perth concerts is in for a treat...