Paul Simon and Sting prove they're aging with grace in Vancouver show - Dynamic duo were seamless and slick at Rogers Arena...

The two are good friends and that's what sees them out for 18 dates of the On Stage Together tour.

Last night at Rogers Arena was night number seven of the tour, and backed by a 14-piece band the show was seamless and slick. From the opening notes of 'Brand New Day', the title track to Sting's 1996 solo album of the same name, the way the two intended to merge the material was made clear.

Two bands and two distinct singers - plus the benefit of Sting playing bass - would turn everything into a world music-tinged orchestra where Sting, 63, and Simon, 73, could trade verses as well as do solo sets with their own bands plus extras.

They both sounded great. No surprise there really.

What mattered was that Sting seemed to be enjoying himself for the first time in a long while. Based on his pompous orchestral hits tour, and the lute album that we won't talk about, the guy has been in a rut as deep as his ego is reportedly large.

Performing familiar faves such as 'An Englishman In New York' and less immediate Police tunes ('Driven To Tears'), his set was pretty much exactly what the fans ordered.

The singer's smile seemed genuine. Particularly when he got to play Garfunkel to Simon. Who wouldn't?

The man may appear onstage like a total schlub, but all you have to do to appreciate Simon's genius is listen to him change his phrasing on 'Mother and Child Reunion', to completely change the emotion of the lyric, or funk out '50 Ways to Leave Your Lover' with a New Orleans second line brass band riff. And a song as new as 'Dazzling Blue' from 2011's 'So Beautiful or So What' proves he still has the songwriting chops.

Plus, a voice that is still awesome.

And if Sting needed an example of how to write a country song, all he needed to do was listen to 'Graceland'. He need never perform that tedious 'Hung My Head' again.

Simon can keep singing 'Still Crazy After All These Years' as long as he wants. He remains one of the most iconic writers of the last 50 years.

If he needs to go on tour with a second to be able to do arenas, there you go. With any luck some aspiring young musicians catch him and get a master class in songwriting.

For more reviews from the Vancouver show please visit http://www.sting.com/tour/date/id/2906 where you can view the setlist, leave your comments about the show, post images of your ticket stub and your photos from the show!
Comments
1
You must be a logged-in member to add comments. Log In | Subscribe
February 21, 2014 posted by jrodhard
um...
wow, this is as anti-Sting rant as I have heard in a long time. Notice he didn't know that Brand New Day was released in 1999. He also failed to mention the Back to Bass Tour...which he seemed to be enjoying himself on as well as every other tour he did pre and post Police reunion...
Newer comments    1 - 1 of 1    Older comments 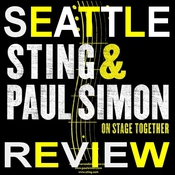 Feb 20, 2014
Paul Simon and Sting enthrall a capacity crowd Wednesday night at KeyArena...
The improbable pairing of two baby-boomer icons - Paul Simon and Sting - enthralled a capacity crowd at KeyArena Wednesday in what Simon affectionately called "our little experiment." Blending their respective bands and repertoires into a powerful evening of rock 'n' roll infused with world rhythms, Simon and Sting took turns performing separate sets as well as stirring duets of each other's most beloved songs. The two friends, neighbors and fellow New Yorkers - who launched their "On Stage Together" tour earlier this month in Texas - expressed a deep admiration for each other that began years ago, when Simon was performing with Art Garfunkel in the folk duo Simon and Garfunkel and Sting with The Police. Separated in age by 10 years - Simon is 72, Sting 62 - the two rock stars proved they have much in common...
Read more
+