Sting’s fifth studio album ‘Mercury Falling’ turns 25 today! Celebrate by listening to all your favourite hits including ‘Let Your Soul Be Your Pilot’, ‘You Still Touch Me’, ‘I Was Brought To My Senses’ and ‘I’m So Happy I Can’t Stop Crying’. Originally released in 1996, ‘Mercury Falling’ was nominated for two Grammy Awards: Best Pop Vocal Album and Best Male Pop Vocal Performance for ‘Let Your Soul Be Your Pilot’. 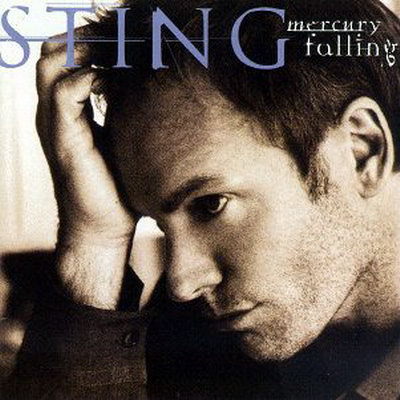 "This was the second album written and recorded in Lake House. I was enjoying these long periods at home with the family. I'd spend so much of my life in hotel rooms and concert halls. I felt that at last I was living a real life. The kids would come home from school in the afternoon and we'd all have dinner together like a normal family. I suppose the album title suggests, among other things, that my mercurial life was beginning to find some balance, like I'd finally put down roots. I'd always believed that "settling down" was anathema to creativity, but I wanted to give it a shot.

‘Mercury Falling’ was the first lyric I wrote, the first line of the first song called 'The Hounds Of Winter'. There are so many styles on this record and it darts around from genre to genre and back again. It's a very mercurial record, and it seemed to be the right thing to call the record. And at the end of the record I return to this idea of mercury falling - only to rise again." – Sting

To celebrate the release of Sting’s new album ‘Duets’, you could win the opportunity to receive a virtual, solo performance from Sting - filmed especially for this competition – along with a personalised shout out from Sting himself! To enter the competition, order any format of ‘Duets’ (CD / Vinyl) from the official store before 3pm on Thursday 25th March. This is the ultimate keepsake to commemorate this 17-song collection, featuring many of Sting’s most beloved collaborations through the years...

To accompany Sting’s newest album Duets, out March 19,  a new interactive website will launch today, March 2 as a visual companion piece detailing each track with photo-visual content and new video commentary from Sting. Available in multiple languages (English, French, Italian, German, Spanish, Polish and Japanese), the website chronologically explores his new album with a musical journey spanning from 1992 to the present. Fans are invited to...