Billy got us here, no one else could have done it...

We’ve been friends now for over four decades, and I may have spent more time with you than I’ve spent with my wife or my kids, literally thousands upon thousands of gigs, trekking from city to city, country to country, and enough long haul flights across the planet to reach to the moon and back. 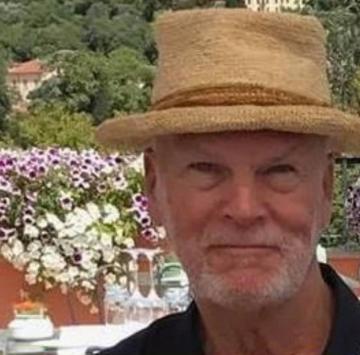 It was you, the tour manager, who got us all there safely. We never missed a gig, always on stage promptly at whatever time we were advertised, two hours on stage, into the van and on to the hotel for a drink in the bar and a night’s sleep, and then up early the next morning for another round and yet another destination. This has been our life for over forty years.

You’re a big man billy, that always helped, with that distinctive white head of your’s leading us through the chaos of airports and railway stations like a straggling line of ducks chasing their mother.

None of us were ever late, we didn’t dare to be late, we knew you’d leave us stranded there if we were to fall behind. Surely you wouldn’t leave me, nonetheless even me, the de facto boss, was unwilling to take the risk.
You’re a tough man Billy Francis, but you never raised your voice or your fists to command respect, you didn’t have to.
That’s the discipline of an army, and we were like an army, a tight little band of guérrillas, no excess baggage, no fat, no bloated entourage of camp followers, just the bare minimum of personnel, no frills. These were your rules, and we gratefully accepted them.

It has to be said though, that this toughness was always leavened by a subtle sense of humour that could in truth veer towards the wicked at times, and the stories of your ‘lessons’ became the stuff of legend, ingenious, salutary and head-shakingly hilarious.

So now we are following you again, to a new destination. A destination none of us have visited before, your obedient ducklings once again lined up behind you. As always you’re up there ahead of us dealing with ground staff, emigration formalities, customs, handling agents, but this time with no baggage, not for this one. No more lugging or weighing of heavy cases, only the passport that declares a life lived, a life lived to the full, of joys, of sadnesses, successes, the odd failure but all of them acknowledged with that resolute discipline of yours, and that unflappable humour.

As ever we are watching, watching and learning, for our own exits will follow yours as surely as night follows day, you’re just a little further down the line than we are. I’m watching you now, drinking in your courage to fortify myself for the journey that I too must take.

I couldn’t have had a better teacher, big brother, protector, mentor, confidente, or companion for life than you my friend. I love you, I’m immensely proud of you and the friendship we’ve forged together over the years.

Know this, I’ll be with you until kingdom come, until that great cosmic gig in the sky, the gig to end all gigs.

How the Hell did we get here?... we’ll ask. Billy got us here, no one else could have done it.

Comments
9
You must be a logged-in member to add comments. Log In | Subscribe
June 09, 2020 posted by johnmartyn
R.I.P. Beautiful Billy
Can't process this. You'll be with me always xx We've all lost someone truly special.
June 09, 2020 posted by johnmartyn
So long Billy
Forever loved
June 01, 2020 posted by airolg
With deepest sympathy
And when the earth shall claim your limbs, then shall you truly dance. - Kahlil Gibran
June 01, 2020 posted by Giuly74
Nothing will be the same again.
Good bye Mr. Billy Francis. RIP. For so long time you were part of our world too, as you were the guardian angel of our beloved Sting on tour. As fans we respected you and loved you too, as you allowed everything to be perfect for us, for our joy and emotions. It’s a sad day, as it’s sad and touching to read Sting words dedicated to Billy. In this difficult months we are living, it seems that Billy represented the strong, fearless and tireless, side of all of us, as we were at all concerts. It won’t be the same without him. We are sorry for Sting facing this big loss and we pray for Billy and for all who loved him.
May 31, 2020 posted by AlMarks327
So fortunate you were my friend
I echo the sentiments that I have just read by Sting. I consider myself very fortunate to have known and worked with you over 4 decades. When they made you they lost the mold and for that I am thankful I got a chance to experience that was the man named Billy Francis. I will miss you my friend R.I.P.
May 31, 2020 posted by PianoManKD
RIP
Beautiful - RIP Billy.
May 31, 2020 posted by ahana
Kind and efficient
Such beautiful words, Sting. Divine love bursts from your heart, once again, into perfect poetry. I was fortunate to meet Billy 2 or 3 times. He was most kind and efficient as he facilitated a sincere fan’s requests. I’m grateful you had his guidance, Sting, and offer these words: “Love Never Dies It’s as close as your Heart, As quick as your breath. All you need do is think of your loved one And they will truly be there” In Oneness of Spirit, Ahana
May 31, 2020 posted by Vivix
Rip
Lovely words to say "have a good trip" to a real friend.
May 31, 2020 posted by stingcom
Rest in Peace Billy
Such sad news about Billy Francis. Thanks for all the kindness, patience and good humour you showed to us for decades. It was always a joy to bump into you at a show and we'll miss you. Let Your Soul Be Your Pilot. D&W
Newer comments    1 - 9 of 9    Older comments

Check out these Sting classics from Dream Of The Blue Turtles 35 years later, #remastered in HD on @YouTubeMusic. Don't they look great? Click here to view the playlist of the four videos...

It's day who knows what in quarantine for Ricky Martin, but today (May 28) takes on a different meaning for the Puerto Rican singer-songwriter. Surprising his fans with a new EP titled Pausa, the first collective set since his 2015 A Quien Quiera Escuchar, features collaborations with Sting, Carla Morrison, Pedro Capó, Diego El Cigala, among others...