The following article by Rob Weinert-Kendt appeared in an October 2014 issue of The New York Times...

From Newcastle to Broadway - Sting and Jimmy Nail on the Musical 'The Last Ship'...

Jimmy Nail was having an out-of-body moment. His lanky frame was folded in an armchair in the low-ceilinged basement lounge of the Neil Simon Theater for an interview, but his tired eyes suddenly searched the room's four corners, as if he were trying to see beyond its walls: back to Newcastle-on-Tyne, back to the shipyards where he and the men of his family once toiled.

"I worked on big turbines that propelled the supertankers," said Mr. Nail, the son of a shipyard foreman who plays one in the new musical "The Last Ship," which has songs by another Newcastle native with a sharp-edged moniker, Sting. "You had a turbine shed that might have been four times the length of this room, and in the middle of it was a turbine, and men were crawling all over it like ants, welding it and polishing it."

Mr. Nail, though a writer and performer of some renown in Britain, didn't write any of the music or words for "The Last Ship," which has a book by Brian Yorkey ("If/Then," "Next to Normal") and John Logan ("Red," "I'll Eat You Last"). But reveries like this give some indication why Sting has kept Mr. Nail by his side while writing and staging the show, which after a Chicago tryout run opens on Broadway Oct. 26.

"I had an instinct about Jimmy very early on, that I needed him as a talisman, if you like, a blueprint for the kind of actor I need," Sting said, coiled in an adjacent chair before a recent rehearsal. Mr. Nail "actually kept me going when I'd be flagging and I'd think, 'I'm not sure what I'm doing here,' and he'd say, 'No, it's important work,' " Sting added. "Without Jimmy, we wouldn't be here."

Not that Sting doesn't have his own Newcastle memories to draw on for "The Last Ship," which follows the efforts of shipbuilders to seize control of their shuttered shipyard. He grew up down the street from the Swan Hunter shipyards in Newcastle's Wallsend neighborhood, where he watched destroyers and frigates take shape, and witnessed a daily crush of thousands of shipbuilders trudging by his house over the dairy run by his father.

"I was terrified of them, and I didn't want to end up" in that throng, said Sting, whose memoir, "Broken Music," details the escape route he mapped through music and literature. "It's ironic that I would find my muse in this thing I fled from. There's a debt to pay, really. It was a very fertile place to grow up - in hindsight. At the time, it felt grim."

Sting is quick to point out that "The Last Ship" - in which a prodigal-son figure named Gideon (played by Michael Esper) returns after years away from Wallsend to tie up unfinished business - is more allegory than autobiography. His initial inspiration, he said, was a 2009 article in The New York Times about unemployed and homeless former shipbuilders in Poland who, encouraged by the priest who ran their shelter, are building a ship on their own in an abandoned tractor factory.

He also cited as a precedent the seminal "work-in" led by Jimmy Reid in Glasgow in 1971 and '72, in which shipbuilders resisted the government's plan to shut down their shipyard by occupying it and continuing work at full steam for nine months.

But while the postindustrial English milieu of "The Last Ship" would seem to place it in an oddly populous genre - "Billy Elliot," "Kinky Boots," "The Full Monty" - it studiously avoids specific period references. Though there's a Marxist firebrand among the ranks of the show's workers, for instance, you won't hear the name Thatcher escape his lips.

"We settled, in terms of costumes and mise-en-scène, on a vaguely '80s setting," Mr. Logan said in a phone interview. "But there are no specific references to a piece of music or fashion, and that's a function of what the show is. The opening song is called 'Island of Souls.' It's not called 'We're Working and Building Ships.' " Mr. Logan said that Sting's orientation "toward the mythic and universal, in terms of what hands-on work and relations in the family mean, really led the way."

The director, Joe Mantello, also played down specific historical or biographical parallels in a phone interview.

"Gideon isn't Sting," Mr. Mantello said. "I don't even see him as a Sting figure." But he conceded: "Like Gideon, Sting had to return to his past to unlock something. He had writer's block for 10 years, and he had to go back to this place that he'd run from to unlock something in himself."

It does seem clear that Sting, far from treating his first foray onto Broadway as a lark, is working something out with "The Last Ship." At 63, he still cuts a lean, vulpine figure and has an unmistakable rock-star aura, but he wears it lightly. In a recent interview, he appeared disarmingly vulnerable, even tentative.

Part of this is surely the sheer exhaustion of the show's high-stakes preview period, in which - after encouraging but mixed reviews in Chicago - the show's creators are tinkering with the right mix of humor and earnestness.

Budgeted at $14 million, "The Last Ship" also carries with it knife's-edge expectations: As yet another pop songwriter's maiden stab at a Broadway musical, will it be another "Kinky Boots" (songs by Cyndi Lauper, Tony winning, still playing) or another "Spider-Man: Turn Off the Dark" (songs by Bono and Edge of U2, closed at a huge financial loss)?

But it may be the subject matter that's putting him through the wringer. Sting, Mr. Logan said, has often sat by his side during previews. Coincidentally, Mr. Logan's father worked in the shipyards in Belfast, and he reported that the show's "last 15 minutes," in which Gideon struggles to make peace with a difficult father, "Sting and I find almost unbearable to watch, because it's so close to home."

Asked if he resisted revisiting his past, Sting sounds almost resigned to its hold on him.

"To go back to my hometown brings up a lot of painful memories," said Sting, whose memoir also describes the toll on his parents' marriage from a long-term affair carried on by his mother; a love triangle among a woman and two men is at the center of the musical. "I have to dredge up a lot of stuff. At the same time, it's felt very cathartic and liberating. It's all therapy."

Before trying his hand at the stage, Sting spent the last decade or so on varied projects, including a reunion tour with the Police, a wintry holiday compilation and an album of Renaissance lute music, "Songs From the Labyrinth," that was as easy to enjoy as it was to mock. Songs for the new musical, which he released as an album last year and performed in a series of benefit concerts at the Public Theater, represent his first collection of original material since the 2003 album "Sacred Love."

If Sting seems more focused and down to earth than ever these days, it may be in part thanks to the steadying influence of Mr. Nail, who, after apprenticing in the shipyards and gaining his nickname (his real name is James Bradford) from an accident in which he impaled his right foot on a spike, left Newcastle for London to become an actor, television writer and singer-songwriter. (He even once covered the Police hit "Walking on the Moon.")

Though they didn't become friends until their time in London ("We met in exile," Sting said), the two have a brotherly rapport, with Mr. Nail, though three years Sting's junior, coming off as the elder sibling. Mr. Nail maintains a strong Geordie accent - a Newcastle dialect that sounds a bit like Scottish by way of Scandinavia - and an unshakable gravity, even as he deploys a dry, deflating wit. When Sting compared the community-under-siege story line of "The Last Ship" to "Fiddler on the Roof," Mr. Nail suggested an alternate title: "Welder on the Roof."

Mr. Nail has even claimed a privilege not enjoyed by Sting's wife.

"Over the last few years, I've been calling him Gordon a lot," said Mr. Nail, referring to Sting's original name, Gordon Sumner. It's not idle teasing, but "a ham-fisted way of trying to keep us plugged into who we were as kids," Mr. Nail said. "During the writing process, when Sting was creating this incredible body of compositions, I thought it was part of my gig to keep him plugged in to where that was coming from - to just keep us anchored in Newcastle."

Nautical metaphors are inevitable in any large stage production, from its dramaturgy to its set construction, from talk of "getting on board for the journey" to the heavy workings of the stage machinery. "The Last Ship" is, of course, awash in them. "All this looks like a ship to me, down below stage. It's like being in an engine room," Sting said. "The pit is like a submarine - smells of one, too."

Less predictably, perhaps, "The Last Ship" is also heavy on religious symbolism. Father Jim, the kindly if heterodox priest who inspires the show's workers to seize their means of production, sees the shipbuilders' plight as his ministry and memorably preaches: "A man's work is a sacrament, isn't it? An outward sign of inward grace."

It's a thought that might have sprung from Mr. Nail himself. In calling to mind the vaulting expanse of the turbine shed where he once worked, he noted one detail that might have escaped others' attention.

"On the roofs, there were glass panels, and some of them were tinted like a bronze color. When the sun would come in, it was like a cathedral, an industrial cathedral."

He paused as he glanced around the theater lounge, seeming to register its distance from 1970s Newcastle, and to flinch slightly at the full brunt of his next thought: "And it's all gone." 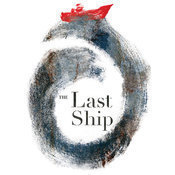 Oct 14, 2014
The Last Ship TimesTalk With Sting and Joe Mantello Will Be Live-Streamed...

Grammy Award-winning singer-songwriter Sting and director Joe Mantello will be part of an Oct. 20 TimesTalk to discuss the new Broadway musical The Last Ship, which opens on Broadway Oct. 26 at the Neil Simon Theatre. Directed by Tony winner Mantello (Casa Valentina, Wicked), The Last Ship arrived on Broadway in September following a Chicago world-premiere engagement earlier this summer. New York Times chief pop music critic Jon Pareles will lead the sold-out 6:30 PM discussion between the two collaborators, which will also be live streamed at TimesTalks.com...

Award-winning singer-songwriter Sting chats with Playbill.com about overcoming years of writer's block with the new autobiographical musical The Last Ship. Sting looks tired. It's understandable, considering it's the hour before the final run-through of the first Broadway musical he's written (and, in true theatre tradition, re-written). The auditorium of the Neil Simon Theatre is crowded with tables and cables, the room dominated by dozens of tech people the audience never sees. It's refreshing that a 16-time Grammy winning superstar looks like a sleep-deprived theatre person, rather than one of those aging rockers who now resemble their wax figures at Madame Tussaud's. "It's an out-of-body experience," Sting says, rubbing his eyes. "You relinquish a lot of control, but all of these people bring something to the process I can't."