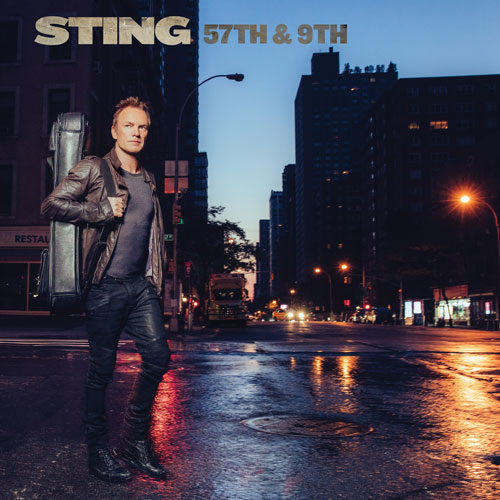 STING’S NEW ALBUM, 57TH & 9TH, TO BE RELEASED NOVEMBER 11 ON A&M/INTERSCOPE RECORDS
Album Now Available for Pre-Order; Tracklisting Revealed
First Single, “I Can’t Stop Thinking About You” Out Now at all Digital Outlets

A&M/Interscope Records announces the release of Sting’s new album, 57th & 9th, his first rock/pop project in over a decade, on November 11.

“It happened very quickly, very spontaneously,” he says. “My idea always is to surprise myself and the people I'm working with—and, hopefully, the listeners.”

Earlier today, he debuted “I Can’t Stop Thinking About You” with a world premiere performance on the Kevin & Bean show at KROQ, LA’s premiere alternative rock station. The single is available now at all digital retailers.

The album, produced by Martin Kierszenbaum, takes its title from the Manhattan street corner that Sting crossed each day as he walked to the studios in Hell’s Kitchen where the recordings were done. Sting notes that if there’s a theme in the lyrics of 57th & 9th, it’s the idea of travel and motion, most apparent in the autobiographical “Heading South On The Great North Road” and in “Inshallah,” a first-person account of the global refugee crisis, written from a humanitarian point of view.

“It’s about searching and traveling, the road, that pull of the unknown.” he says. “On this album, we ended up with something that’s energetic and noisy, but also thoughtful.”

Standard:
I Can’t Stop Thinking About You
50,000
Down, Down, Down
One Fine Day
Pretty Young Soldier
Petrol Head
Heading South On The Great North Road
If You Can’t Love Me
Inshallah
The Empty Chair
*Also available in 180 Gram Vinyl

Deluxe:
Includes liner notes penned by Sting + 3 bonus tracks:
I Can't Stop Thinking About You (LA Version)
Inshallah (Berlin Sessions Version)
Next To You with The Last Bandoleros (Live at Rockwood Music Hall)

'57th & 9th' is due out Nov. 11. No lutes here. This fall Sting, 64, returns with his first pop-rock album in more than a decade. 57th & 9th, named for the intersection he passes every day on the way to and from his studio, was recorded at lightning speed for the icon in just under four months - and was, as he says, fueled by the deaths of friends like David Bowie and Prince, climate change, and walking around Manhattan. Here, he takes EW behind the scenes of his creative process...